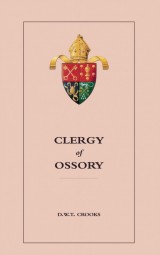 The origins of Christianity in Ossory are associated with St. Kieran whose foundation, Saighir Kieran, flourished for many centuries. St. Canice (c525–c599), founded a monastery at Aghaboe. St. Canice is thought to have established a cell in the vicinity of Kilkenny, thus bequeathing his name to the city, Cill Chainnigh, Canice’s Church.

Kilkenny, the chief city and largest centre of population in the Diocese of Ossory, possesses the second largest mediaeval cathedral in Ireland, only St. Patrick’s Cathedral in Dublin being a larger mediaeval building.

The Diocese of Kilkenny was founded at the Synod of Rathbreasil in 1111, and was re-named Ossory shortly afterwards.

This volume contains a complete revision and updating of Canon Leslie’s original published volume, Ossory Clergy and Parishes which he published in 1933. It is the thirteenth in the series of volumes of Succession Lists of Clergy and Parishes of the Church of Ireland, and the eleventh to be published by the Ulster Historical Foundation.