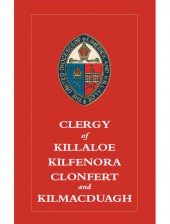 Colman, son of Duach established his Episcopal seat at Kilmacduagh around 610 A.D. The Dioceses of Killaloe and Clonfert were established at the Synod of Rathbreasil in 1111, when the Irish Church was re-organised. The Diocese of Kilfenora was formed at the Synod of Kells/Mellifont in 1152, when the arrangements made at Rathbreasil were modified. The Diocese of Killaloe covers an area from Loop Head in West Clare to Kinnitty, east of Birr in Co. Offaly. Kilfenora and Kilmacduagh occupy the scenic coast of West Clare and include the Cliffs of Moher and the Burren. The Diocese of Clonfert is centred around the towns of Ballinasloe and Loughrea in East Galway.

This volume brings up to date the two volumes of unpublished Succession Lists of Clergy of Killaloe, Kilfenora, Clonfert and Kilmacduagh which were produced in 1939 by Canon James Blennerhassett Leslie (1865'1952). Within these pages are photographs of most of the churches, brief Historical notes on the four Dioceses and on the parishes, as well as biographical notes on all the clergy both from the original manuscripts and on those who served there since 1939.

The Clergy of Killaloe, Kilfenora, Clonfert and Kilmacduagh is the eleventh in a series of revisions of Succession Lists of Clergy of the Irish Dioceses, which commenced in 1993 with the publication of Clergy of Connor from Patrician Times to the Present Day. It will be followed shortly with Clergy of Cashel and Emly and Leighlin, and with Clergy of Ossory.