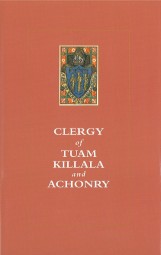 This volume is a reproduction and updating of Canon James Blennerhassett Leslie's two original manuscripts which he produced for Tuam and for Killala and Achonry, both in 1938, but which were never published. It contains also, photographs of those churches which are still in use, or which are now closed, but being used for other purposes. Ruined churches have not been included, with the exception of the church at Hollymount, Co. Mayo with its iron spire.

There are also brief historical notes on most of the churches.

This volume should prove to be a valuable source of interest to those who are seeking to known about the ancient and priceless heritage of the Christian church in Ireland, and that part of it which is situated in the west, amongst the beautiful hills and lakes of Connemara.

Parishes of Tuam, Killala and Achonry with Lists of Clergy

Biographies of the Clergy