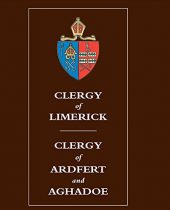 Clergy of Limerick, Ardfert and Aghadoe is the fourteenth volume of revised clergy succession lists for the Church of Ireland to be published in the past 20 years, and the twelfth in the series by Ulster Historical Foundation.

The series of revised and updated lists began in 1993 with the publication of Clergy of Connor, prepared by Fred. J. Rankin, and closes with Clergy of Limerick, Ardfert and Aghadoe. It is also likely to be the last volume which Canon David W. T. Crooks and the Foundation will publish.

Over the years Canon Crooks has been involved in some way with nine of the new volumes, starting with Clergy of Derry and Raphoe, which he prepared with Canon F.W. Fawcett, and he has been the joint editor, or latterly, the sole editor, of seven of the 12 volumes published by the Foundation. This is a remarkable achievement and a huge commitment to preserving the history of, and documenting the individuals involved in, the Christian church in Ireland from earliest times.

The Diocese of Limerick was created at the Synod of Rathbreasil in 1111. Its illustrious Bishop, Gilbertus was one of the leading fathers of the reform movement at that time which brought the old monastic system to an end and which replaced it with the diocesan system. The Cathedral of St Mary in Limerick was built later in the twelfth century, and is one of the finest cathedrals in the Church. The Diocese occupies most of County Limerick, and includes the fine mediaeval City Of Limerick on the banks of the Shannon.

Parishes and Clergy of Limerick

Parishes and Clergy of Ardfert and Aghadoe

Biographies of Clergy of Limerick, Ardfert and Aghadoe