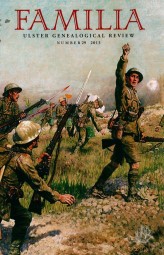 "In the early 1600s, some forty towns throughout Ireland received charters of incorporation, around half of which were located in Ulster. The conferral of these charters marked the beginning of formal municipal government in these towns. The granting of so many charters almost simultaneously was unprecedented in Ireland’s history, and was in part a product of the Ulster Plantation.

This period of critical importance in Irish urbanisation was to alter permanently the island’s social and geographical landscape. Virtually all of the sites chosen had been important places, both in the ecclesiastical and Gaelic worlds, and the legacy of the incorporated towns and their charters remains with us to this day.

In 2013 the Ulster Historical Foundation was commissioned by MAGUS to carry out research into the granting of the Ulster charters and to produce an exhibition and accompanying literature. This article looks at some of the main features of that study"

Ulster-Scots enthusiasts Philip Robinson is the author of Ulster-Scots: a Grammar of the Traditional Written and Spoken Language.

The Manorial Courts of the Earls of Antrim£1.00