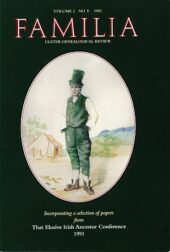 "The aim of this paper is to examine the movement of British settlers into Ulster during the seventeenth century and their spread throughout the province. The first part of the paper discusses the sources which are available to reconstruct the numbers at various times throughout the century.

The second part of the paper considers the various phases of colonisation between 1600 and 1700 looking at the numbers involved, why they came, and where they settled.

Table 1 gives details of the numbers of Scottish and English households in each of the nine counties of Ulster during the 1660s and Table 2 gives estimates of Ulster's population, particularly the British component, at various times throughout the period.

Figure 1 is intended to give a general idea of the various parts of the province allocated to English and Scottish undertakers and Figure 2 outlines the counties and baronies of the historic province of Ulster."

This article looks at the movement of British settlers into Ulster during the 17th century and their spread throughout the province.

Dr. W. A. MacAfee is a retired university lecture who spent thirty years in the School of Education, University of Ulster, Coleraine, Northern Ireland. He was born in the townland of Forttown, County Antrim.
He attended Queen's University, Belfast in the 1960s where he studied geography, history, archaeology, economics and geology. Dr. MacAfee went on to complete a doctorate on this subject at the University of Ulster (Coleraine) under Professor Peter Roebuck. This work related to the population history of Ulster 1630-1841.