Black Friday · MPs in Dublin: Companion to the History of the Irish Parliament 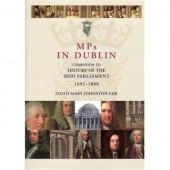 THE IRISH PARLIAMENT met for the first time on 18 June 1264 at Castledermott and for the last time in the Parliament House, Dublin, on 2 August 1800. It had lasted for over 500 years, and from 1707 it was the only parliament in the British Empire with the medieval structure of King (represented by the Lord Lieutenant), Lords and Commons. Like the English/British parliament it only met regularly from the end of the seventeenth century.

In 1692 Ireland had a minimal infrastructure; by 1800 it had become recognisable as the country in whose history and culture there is a continuing and irresistible tide of interest worldwide. Since its publication only four years ago the History of the Irish Parliament has acquired an already legendary status.

The authority of MPs in Dublin as a source of reference has been made manifestly apparent in the reviews it has received from the peers of its author: ''¦ the History of the Irish Parliament is truly awesome '¦', ''¦ sheer admiration for an author [who] has not only honoured the memory of those before her '¦ but who has triumphed over the generations of suspicion that frustrated its achievement during the twentieth century', and as no less a figure than Professor Toby Barnard has admitted 'all concerned with Irish history even those roaming in the foothills must recognise the accomplishment'.

Now Ulster Historical Foundation has made available the heart of this monumental work online. The internet version will dramatically enhance access to the wonderful resource that is the History of the Irish Parliament. Online there is a brief digest of the 1,692 statutes passed between 1692 and 1800 ' these sum up the achievements and ambitions of the 2,273 MPs who passed them; there are short biographies of the MPs; and a brief history of the 300 constituencies which returned them.

This companion volume ' MPs in Dublin ' contains two completely new chapters which look at Irish society and the personal concerns which influenced the MPs. This volume will form a valuable reference work in addition and complementary to the History of the Irish Parliament.

The six-volume History of the Irish Parliament 1692'1800 was published in 2002. The full online resource is now available at ancestryireland.com.