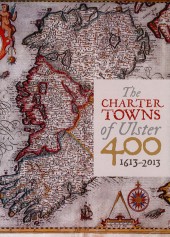 The Charter Towns of Ulster 400, 1613-2013 is an attractive fold out pocket history. The format is similar to that of our Plantation of Ulster Maps.