All Departments · Ireland 1916-2016: The Promise and Challenge of National Sovereignty 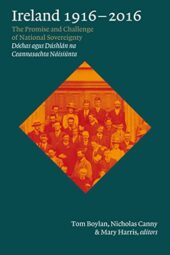 In this conference volume six distinguished scholars of Irish birth or descent – Philip Pettit, Roy Foster, Kevin O’Rourke, Clair Wills, Louise Richardson and Brendan O’Leary – who hold senior positions at some of the world’s leading universities, reflect on what the ambitions and achievements of the men and women who supported the Rising of 1916 have meant to succeeding generations of Irish people at home and abroad. More specifically they consider the theme of the conference from a number of broad perspectives including: the doctrines of classical republicanism and liberalism; the historical contextualization of the major changes over the last century; the economic fortunes, failures and achievements of the new independent state; the cultural representation and interpretation of our post-independent experience; the role of current and future university education in Ireland, and the major challenges Ireland is now facing in a rapidly changing and globalized world.

Tom Boylan is professor emeritus of economics at the NUI Galway. he is a former dean of the Faculty of Arts and in 1998 was appointed the first dean of research at NUI Galway. Nicholas Canny, emeritus professor of history at NUI Galway, was president of the Royal Irish Academy 2008–11. An expert of early modern history broadly defined, his major book is Making Ireland British, 1580–1650 (Oxford, 2001). Mary Harris is a senior lecturer in history at NUI Galway. She was coordinator of NUI Galway's 1916 commemorative programme, and is a member of the Irish government's Expert Advisory Group on Commemorations.