All Departments · A very independent county: Parliamentary elections and politics in County Armagh, 1750-1800 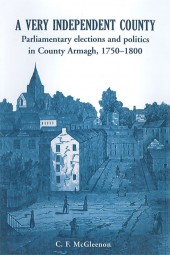 A VERY INDEPENDENT COUNTY: Parliamentary elections and politics in County Armagh, 1750-1800 analyses the background to, and traces details of general elections and by'elections for the county and borough seats in Armagh. In the eighteenth century, County Armagh was famously referred to as a very independent county'' given the distinctive nature of politics and electioneering in parliamentary elections. In this period before secret ballots when polls often lasted for weeks, the following electioneering practices are described: patronage, canvassing of voters by candidates, relations between landlords and freeholders; "conjunctions" and "running horses"; festivities such as treating of voters including transport and accommodation, musical bands and parades; violence and intimidation with cudgels, swords and guns; a paper war of pamphlets.

In A very independent county: Parliamentary elections and politics in County Armagh, 1750-1800 key political families in Armagh are identified who were heavily involved and divided on contemporary national issues such as economical and parliamentary reform, free trade, Catholic relief and Catholic emancipation, union of the Irish and British parliaments.

Social and economic issues in Armagh were intertwined with the politics of the era: religion and society, growth of the linen industry and towns, agrarian unrest, resentment against payment of cess and tithes.

From these issues emerged popular societies, socio'economic protest and paramilitary activities: the Oakboys in 1763 and 1772, the Volunteers in the 1780s, sectarian outrages by Fleets, Peep O''Day Boys and Defenders 1784'90, the United Irish Society and Orange Society in the 1790s.