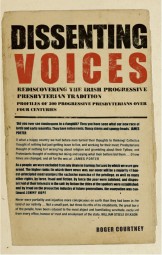 Dissenting Voices: Rediscovering the Irish Progressive Presbyterian Tradition provides biographies of some 300 'progressive' Presbyterians from the seventeenth through to the start of the twenty-first centuries. The stereotypical belief that there are two religions in Ireland, Catholic and Protestant, whose highly-charged fault lines have led to confrontation, fear and misunderstanding, has ignored the strong, vibrant and often courageous dissenting tradition. Dissenting Voices is a long overdue and fascinating guide to some 300 Presbyterians individuals, who have exemplified many of the admirable characteristics of that tradition and in many cases helped shape the course of Irish history, challenged the existing consensus of society for the betterment of all sections of the local community be it in terms of religious freedom, civic rights, the rights of tenants, or even the future political direction of the island of Ireland.

The lives charted in Dissenting Voices: Rediscovering the Irish Progressive Presbyterian Tradition are about more than just the contribution of fascinating and complex individuals to Ireland’s history; they also amply demonstrate the integrity and conviction of those ‘dissenting voices'.

Dissenting Voices will be of value to both the academic and casual reader with an interest in religious history and the progressive tradition of Ireland.

Biographies of Dissenters in Chronological Order

Dr Roger Courtney MBE was born and brought up in Belfast and spent much of his childhood in McCracken Memorial Presbyterian Church in South Belfast, of which his grandfather was the first minister. He was the founder of Crescent Arts Centre and Chief Executive of the Simon Community NI for sixteen years. For the last fifteen years, he has been working as a freelance writer, trainer and adviser to a wide range of voluntary organisations.