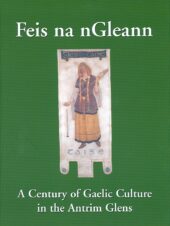 The Glens of Antrim formed one of the last Irish-speaking areas of Ulster until the early 1900s. Until the opening of the Antrim coast road in the 1850s Irish was universally spoken in the Glens and on Rathlin.

The turn of the nineteenth century saw the Gaelic Revival which in the north of Ireland involved both Unionists and Nationalists in an effort to preserve Irish as a spoken language. It was against this background of cultural renaissance that Feis na nGleann ('The Glens Feis') was founded in 1904 as the first Gaelic cultural festival in east Ulster. That inaugural Feis harnessed the talents of the Glens folk and a group of leading 'Big House' figures in the locality, among them Miss Rose Young of Galgorm Castle - a member of a leading Ballymena Unionist dynasty - Miss Ada McNeill of Cushendun and Miss Margaret Dobbs.

Feis na nGleann: A Century of Gaelic Culture in the Antrim Glens traces the origins of Feis na nGleann in that ''crease in time'' between Parnell and the 1916 Rising. In a series of scholarly chapters, experts profile the historic founders of the Feis and record the history of Irish in the district. There are special sections on the traditional arts and crafts fostered by the Feis, the once famous Glens toy-making industry, the role of hurling and the rich literary legacy of the Feiseanna.

The book is lavishly illustrated with unique contemporary photographs. The result is attractive and readable volume which will appeal to all those interested in the history and culture of the Glens and the fortunes of the Irish language in the north of Ireland.

Dr. Eamon Phoenix is Senior Lecturer in History at Stanmillis College, Belfast. A former research fellow at the Institute of Irish Studies, Queen's University, Belfast and sometimes Archivist at St Malachy's College, Belfast, he has published a number of scholarly articles on modern Irish history and a school textbook. He has written extensively on historical issues for the Irish Times and Irish News and is a well-known broadcaster. He is continuing research into Northern Irish Nationalism and its leadership.

Native of Glendun, retired bank manager and member of the committee of Feis na nGleann.

Resident of Glendun and member of the committee of Feis na nGleann. Nuala has been in charge of the music section of the Feis for many years and is also the Publicity Officer.

A native of County Monaghan, a member of Feis na nGleann since 1952, presently holds the post of Vice-Chairperson; former Vice-Principal and Head of Chemistry of St MacNissi's College, Garron Tower.