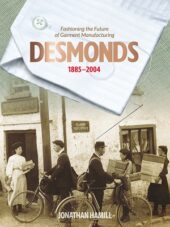 ‘No actually, it was my grandmother.’

As the head of one of the most successful and progressive garment manufacturing companies in Western Europe, Sir Denis Desmond was regularly asked if it had been either his father or his grandfather who had started the business. The assumption was that it must have been one or the other. The reaction to his response – even in the early part of the twenty-first century – was invariably one of surprise. Bridget Desmond was that rarest of individuals: a successful, self-made Victorian businesswoman.

It was Bridget (a mother of thirteen who had been born into a semi-literate farming household in County Donegal) who set the wheels in motion. And it was unquestionably her vision and energy that laid the foundations for everything that was to follow: a dozen ultramodern factories, a workforce that numbered in the thousands, an integral part of Marks & Spencer’s supply chain, the largest manufacturer of pyjamas and jeans in Europe, and the largest privately-owned company in Northern Ireland.

Bridget enjoyed the support of her husband John, whose willingness to give up his own career and back his wife’s business ambitions flew in the face of social convention. All that Bridget needed was an opportunity. And it was opportunity that she, in turn, sought to pass on to those around her. Bridget wanted to position her firm at the very heart of community affairs and she considered her factory a community asset.

Bridget Desmond chose her own path; a path that led to success and longevity; a path that led to Japan, Turkey, Morocco and Sri Lanka; and a path that saw Desmond’s outlive so many other famous names, including Tillie & Henderson – the firm that introduced Bridget to the world of garment manufacturing. With its origins in the Derry shirt industry, Desmond’s represents an unbroken link with the celebrated Ulster textile industry of the nineteenth century. The identifiable and robust business culture established by Bridget Desmond: the willingness to seize opportunities, coupled with a strong belief in the unifying and galvanising power of community, would characterise Desmond’s approach over three generations. Desmond’s faith in the wisdom of Bridget’s business ethos and their loyalty to her values served them well.

Sorry, we have no information on Jonathan Hamill.