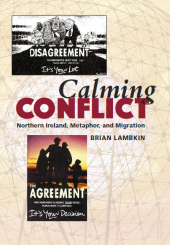 Here’s the problem. Twenty-one years on from the international treaty made in 1998 between the British and Irish governments, the ‘problem’ it was meant to settle is still highly conflicted (not calm). We’re not even agreed on whether we call it the Belfast Agreement or the Good Friday Agreement, or both! As this book goes to press in 2019, Northern Ireland (or is it the North of Ireland) is still ‘emerging’ from thirty years of violence known commonly as the ‘Troubles’ but its peace process is ‘stuck’, at an ‘impasse’.

The powersharing Executive and Assembly, which collapsed in January 2017, is still suspended. Promised measures for dealing with the legacy of the conflict have not been implemented. We have seen come and go the proposals of Eames-Bradley (2007–09), Haas-O’Sullivan (2013), the Stormont House Agreement (2014), and the Fresh Start Agreement (2015). Now we have the results of a public consultation by the British government on ‘Addressing the Legacy of Northern Ireland’s Past’ (2018).

Are we ‘dealing with’ the past, or just ‘addressing’ it?

Here's part of the solution …