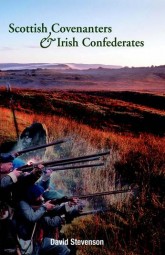 Thus the relations of Scotland and Ireland are clearly of great importance in understanding the complex 'War of the Three Kingdoms' and the interactions of the civil wars and revolutions of England, Scotland and Ireland in the mid-seventeenth century. But though historians have studied Anglo-Scottish and Anglo-Irish relations extensively, Scottish-Irish relations have been largely neglected. Scottish Covenanters and Irish Confederates attempts to fill this gap, and in doing so provides the first comprehensive study of the Scottish Army in Ireland.

David Stevenson, a senior lecturer in Scottish history at the University of Aberdeen, is a graduate of Trinity College, Dublin, and the University of Glasgow. His publications include; The Scottish Revolution, 1637-44: the Triumph of the Covenanters (winner of a Scottish Arts Council Book Award), Revolution and counterrevolutino in Scotland, 1644-51, and Alasdair MacColla and the Highland problem in the Seventeeth Century.