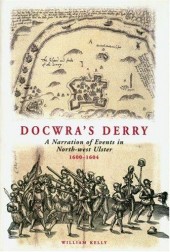 It is widely accepted that no understanding of modern Irish history is complete without an awareness of events in the 17th century. This is true in particular of the Ulster Plantation. Sir Henry Docwra's military expedition, which arrived in Lough Foyle in May 1600, at the height of the Nine Years War, was instrumental in paving the way for James I's Plantation of Ulster that began only a few years later '¦ after Docwra, the English stayed.

The decisive intervention of Docwra's small army brought to an end the conflict whose outcome was crucial in shaping the path of Irish history after 1600. It led also to Docwra bequeathing to us one of the most illuminating military journals in what was to become, even by Irish standards, a war-torn century. His 'Narrations of the Services done by the Army Ymployed to Lough Foyle vnder the leadinge of mee' is not only a fascinating description of Docwra's campaign in the north-west, it can also claim to be the best eye-witness account of a military campaign of the period.

Docwra's 'Narration' was first edited and transcribed by the great Irish scholar, John O'Donovan, in 1849. This edition, edited by Billy Kelly, not only includes O'Donovans comprehensive notes, including translations and descriptions of all the Irish place-names mentioned by Docwra, it also includes insights from more recent scholarship on the Nine Year War. An introduction, new maps, glossaries of terms, a bibliography, chronology and a full index all contribute to making this invaluable and previously scarcely-accessible text available for the general reader as well as being a 'must have' for the many interested in military history.

William Kelly is Research Projects Co-ordinator with the Institute of Ulster-Scots Studies, University of Ulster.