Read While You Wait · Major-General Oliver Nugent: The Irishman who led the Ulster Division in the Great War (Read while you wait) 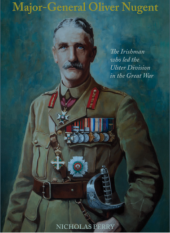