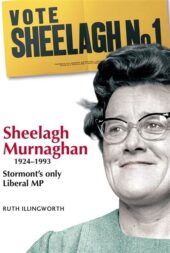 'In Northern Ireland politics, I don't know which is the greatest obstacle: to be a WOMAN, a CATHOLIC or a LIBERAL. I am all three.'

Sheelagh Murnaghan was a remarkable person. She was the first female barrister to practise in Northern Ireland; a talented sportswoman who played hockey for Ulster and Ireland; the only Liberal Party MP 1961-9) in the 50-year history of the Northern Ireland Parliament.

In a country riven by sectarianism, she was consistently a voice of reason and humanity, endlessly challenging the widely-held assumption that it was normal and right to 'look after one's own people' and 'do down the other side'. A patriot in the most genuine meaning of the word she tried to save her country from its demons. Her efforts were spurned and Northern Ireland paid a terrible price for that rejection.

However, time would prove Sheelagh to be right, as a torchbearer for human rights, non-violence and respect for the dignity of others, she proved herself to be decades ahead of other politicians and political parties, as many of her original ideas have come to be enshrined in law in Northern Ireland.

Ruth Illingworth is a historian, author and tour guide from Mullingar, County Westmeath. She has written extensively on many aspects of Westmeath and Irish history. She has lectured at Maynooth University, is president of the Westmeath Archaeological and Historical Society and was a member of Mullingar Town Council from 2004 to 2014. Her most recent books are: "A 1950s Irish Childhood" (The History Press 2018) and "The Little Book of Westmeath" (The History Press 2016).