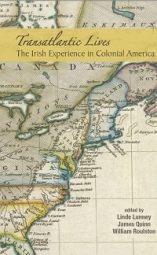 Transatlantic Lives: The Irish Experience in Colonial America features sixty biographical essays from the Royal Irish Academy’s Dictionary of Irish Biography, detailing the careers of a selection of Irish emigrants to North America in the colonial period (including the British territories that would later become Canada).

Those chosen are a representative sample of some of the more notable figures among these emigrants. Colonial administrators, soldiers and clergymen predominate. Among clergymen, Presbyterians (of various hues) are the most numerous, but space has also been found for Methodists, Quakers, Anglicans and Catholics, all of whom made their contribution to shaping the religious culture of the colonies.

The selection, however, also includes educators, doctors, writers, artists, printers, merchants and even a (female) pirate to give some sense of the diversity of such emigrants, and their varying contributions to the economic and cultural development of the colonies. Most of these stayed in the colonies, but a sufficient number returned to Ireland, providing some evidence for the contention that emigration to the colonies was not always an irrevocable decision.

Editor's note on the selection of biographies   vii