All Departments · Migration Studies · The Irish Friend, 1837-1842: Excerpts from the pioneer Quaker newspaper 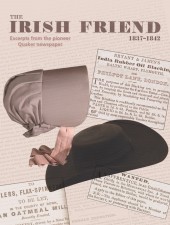 In 1837, from the relative obscurity of Belfast, an equally obscure but frenetically active merchant suddenly sprang a newspaper on the unsuspecting and rather closed Quaker community of Ireland and Britain. Five years on, he equally suddenly pulled the plug on it. At its height, The Irish Friend was being read by half the households of the Society of Friends in these islands, and many others besides. William Bell was its ‘its sole proprietor, financier, Editor, sub-editor, dispatch clerk, advertisements clerk, manager, secretary and general factotum’.

In its 684 pages The Irish Friend brought Quakers back to the basics of the faith and practice of their 17th century founders, yet was in many ways miles ahead of its time. This apparent contradiction is well reflected in this attractive commonplace book. If some of the 150 excerpts chosen are reactionary in regard to, say, novels, the theatre or alcohol, others are trenchant and progressive, even by today’s standards, on slavery, colonisation, pacifism, capital punishment, prison reform or the role of women. A masterly essay on the paper by a former editor of The Friend, carried by way of introduction, acknowledges that The Irish Friend pioneered Quaker journalism on this side of the Atlantic. Within weeks of its demise it had to be replaced by media which have lasted to the present day.

Selected for secular and philanthropic rather than devotional content, and for Irish resonance, this colourful mix of articles, poems, advertisements, curiosities and contemporary illustrations is enhanced by contributions from or about such figures as Daniel O’Connell, Elizabeth Fry, Thomas Hodgkin, Mungo Park and John Bright. On everything from aborigines to rabies, from the founding days of the Friends Provident to mixed marriages, it makes for a fascinating late-Georgian ‘scrapbook’ into which historians, students, thinkers – and the plain reader – will find themselves dipping again and again.

'A Pioneer Quaker Newspaper, The Irish Friend 1837-1842'
essay by the late Bernard Canter, sometime editor of The Friend

The Corporal and the Celestials: In North China with the Royal Inniskilling Fusiliers, 1909-1912£13.99