All Departments · Migration Studies · New Light At The Cape Of Good Hope: William Porter, The Father Of Cape Liberalism 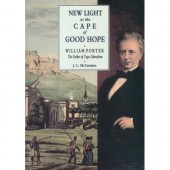 Porter came to the colony, he said, with an unspeakable hatred of oppression of every kind. As attorney general he insisted on equal justice for all, blacks and whites, masters and servants. He also used his ex-officio political role to promote, and win accepability for, his liberal convictions. The constitution he drew up in 1854 provided for a parliament elected by blacks and whites on equal terms. After retiring in 1865 he was elected to parliament and worked for responsible government, for religious freedom and for the propagation of such advanced ideas as the abolition of capital punishment and the higher education of women.

Porter declined all offers of honours and promotions - a knighthood, the chief justiceship, the prime ministership. In 1873 he returned to Ireland and lived with his brother Rev. John Scott Porter in Belfast until his death in 1880. His will reflected his devotion to the Cape in the large donations he made to public institutions there.

Part I
The road to the Cape

1.The formative years
2.The Irish apprenticeships
3.Appointment to the Cape
4.Passage to Cape Town

5. Porter in the Cape context
6. Private life and social obligations
7. The attorney general
8. Porter in a multi-racial society
9. Porter in Cape politics

Prof J. L. McCraken was born in Co. Down Ireland in 1914. After graduating in History from Queen's University in 1936, he then went on to teach History in Wallace High School as well as serving as their vice principle until 1945.  He then moved to Witswatersrand University to become a lecturer  in History. While at Witswatersrand he completed his PhD from Queens university.

Prof. J.L. McCracken worked as a researcher in Dublin and took a senior lectureship at Magee University  for many years before becoming a Professor at University of Ulster and retired to South Africa  in 1979. In 1993 he published New Light At The Cape Of Good Hope: William Porter, The Father Of Cape Liberalism.

The Corporal and the Celestials: In North China with the Royal Inniskilling Fusiliers, 1909-1912£13.99

Irish Covenanters: Politics and Society in the 19th Century£10.00