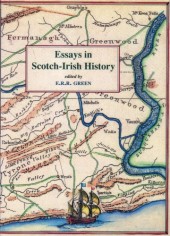 This is a reprint of the second volume in the Ulster Historical Foundation's Historical Series, which was first published in 1969. These five essays were delivered as lectures at a conference on the Scotch-Irish held in Belfast in 1965. This edition contains a new introduction by Steve Ickringill of the University of Ulster re-viewing recent research.

The next paper considers the educational contribution of the Scotch-Irish to colonial America, beginning with elementary church schools and academies for preparing young men for the ministry, and proceeding to the most important institution, Princeton, decisively Presbyterian and Scots in character.

A neglected period in the study of Irish emigration is covered in an essay on Ulster Emigration to America, 1783-1815; this shows that emigration continued on a large scale after 1783 in spite of British Government restrictions, and that these emigrants like their predecessors, immediately assumed loyalty to their adopted country, notably in the war of 1812.

The fourth paper argues that perhaps the most important aspect of the influence of the Scotch-Irish in the making of the United States was not so much their contribution to leadership in politics and education as in their shaping of the patterns of settlement and land-use.

The final essay, on Ulster's emigrant's letters, points to the value of these documents as sources of information on the emigrant experience, both social and economic.

The Many Faces of the Scotch-Irish£1.00