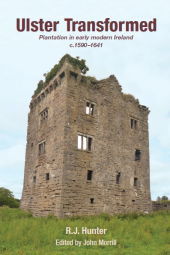 R.J. Hunter occupied a unique place among historians of early modern Ireland – a highly respected scholar, much loved by his students and fellow academics. This volume brings together a selection of his finest essays: the more significant scholarly works which primarily reflect his interest in the Ulster Plantation and includes articles
on the progress of urbanisation and the social and economic impacts of these momentous times. Other essays are case studies of the Plantation in particular areas, through the exploration of the part played by key individuals, and involve a strong sense of material culture and the physicality of cultural engagement. Included in this volume are nineteen essays of substance that Hunter produced over a 40-year period from 1964. They have been arranged thematically rather than chronologically; they cover eight counties in historic pre-partition Ulster. Included also is a cluster of articles on the print trade, focused on Dublin.

Please note, this book was first published by  in 2012 as Ulster Transformed c. 1590–1641: Essays on Plantation and Print Culture

Ulster Transformed: Plantation in early modern Ireland c.1590–1641 constitutes one of the five volumes in the R.J. Hunter collection. Other titles in this collection are:

John Morrill FBA HonMRIA is Professor of British and Irish History at Cambridge University and an Honorary Fellow of Trinity College Dublin. He has written prolifically on the early modern period and was one of the four principal investigators who prepared the 1641 Depositions for its web edition (1641.tcd.ie). He became a good friend and admirer of Bob Hunter while he was external examiner for an MA course at the (New) University of
Ulster from 1981–9.