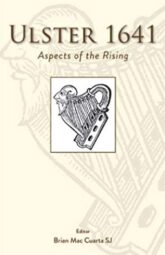 Ulster 1641: Aspects of the Rising is an accessible and valuable publication for those interested in early modern Europe, the development and relationship between religion and society in the 17th Century and also for anyone interested in Ireland's troubled past. In 1641 a breakdown occurred between natives and settlers, along ethnic and religious lines.

First published in 1993, this book of essays examines the genesis and impact of this conflict. Topics covered include; detailed local studies of the violence; background articles on the Ulster Plantation, Protestantism and the broader 'Three Kingdoms' political setting; analysis of the place of 1641 in the Protestant sense of identity; and the examination of the Gaelic literary and continental contexts of the Ulster-Irish community.

This new edition includes a bibliographical essay by the editor in which he highlights publications produced between 1993 and 2018 that have relevance to the rising and the periods immediately before and after it.