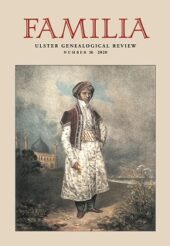 Since 1985, Familia has set a consistently high standard of balanced articles of wider historical and biographical importance, and providing all-important practical advice on sources for Irish family and local history in the nine-county province of Ulster.

This edition of Familia includes the following articles: