All Departments · Books · Latest Releases · A Chronicle of Comber: The Town of Thomas Andrews, Shipbuilder, 1873–1912 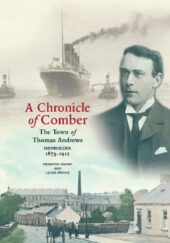