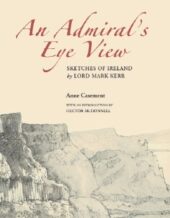 Images of life in Ireland, particularly Ulster, in the first half of the nineteenth century are uncommon. And, because they depict sights both remarkably familiar and totally absent, are all the more valuable and poignant. Such is the historical value of the sketches of Lord Mark Kerr that are so faithfully and exquisitely reproduced in this volume.

Born in 1776, the third son of the 5th Marquess of Lothian, Kerr (pronounced ‘Carr’) served as a captain in the Royal Navy during the early part of the Napoleonic Wars, subsequently reaching the rank of Vice-Admiral. In 1799 he married Charlotte McDonnell who had inherited half of the McDonnell family’s Antrim Estates. His regular visits to Ireland and his association with the management of his wife’s estates provided Kerr with opportunities to record many of the local landmarks and scenes – including
the Giant’s Causeway, Dunluce Castle and Rathlin Island which, being a sailor, he sometimes sketched
from a boat – and which feature so strikingly in this book.

In the Navy he had learned the essential skills of surveying and accurate depiction of coastal land profiles. These, added to his very considerable artistic abilities, are clearly evident in the range of sketches he made on his travels throughout Ireland.

In Antrim, the castle and estate at Glenarm and the bustling towns of Ballymoney, Ballycastle and
Portrush are all depicted as are well-known County Down scenes, including the Donaghadee–Portpatrick ferry crossing, as well as images from County Kildare.

As a collection, Kerr’s sketches record features of Ireland that have long disappeared but which can be
re-created by these very fine and sensitive drawings of the Irish, particularly Ulster, landscape and heritage.

Anne Casement’s special field of interest is the history of landed estates, and in 2002 she was awarded the degree of Doctor of Philosophy for her study of the management of Irish estates in the midnineteenth century.

For the purposes of this book she has drawn particularly on her work on the Antrim and Londonderry families and their estates, together with local knowledge and contacts garnered over thirty years’ interest in the history of north Antrim and its people. Anne is an elected member of the National Trust Council, and sits on the boards of the Irish Architectural Archive and Northern Ireland Environment Link.

She frequently appears as a lecturer at the annual conference of the Centre for the Study of Irish Houses and Estates, NUIM, and meetings of local historical societies in Ulster. She has published many articles in Familia, Irish Architectural and Decorative Studies, and Apollo magazine.