All Departments · History and Research Bundles · “New Worlds” Down Under 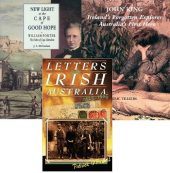 Our From Ireland to the “New Worlds” Down Under bundle includes the following publications:

The immigrant Irish, distinctive independent and colourful, have had a profound and sometimes spectacular impact on the history and character of Australia, but this book goes beyond the sometimes superficial and public manifestations of Irishness in Australia. It shows through the lives of the ordinary Irish - Anglo-Irish, Ulster Protestant Irish, and Catholics from both South and North - the extraordinary complexity and diversity of the Irish influx, and the way it interacted, at the ordinary day-to-day level, with its new Australian environment.

New Light At The Cape Of Good Hope: William Porter, The Father Of Cape Liberalism