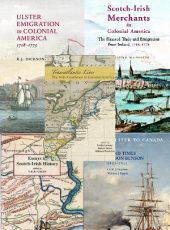 Transatlantic Lives: The Irish Experience in Colonial America features sixty biographical essays from the Royal Irish Academy’s Dictionary of Irish Biography, detailing the careers of a selection of Irish emigrants to North America in the colonial period (including the British territories that would later become Canada).

Scotch-Irish Merchants in Colonial America: The Flaxseed Trade and Emigration from Ireland, 1718-1755

This important book provided for the first time a balanced and professional study of the entire emigration phenomenon and carefully examined the economic, social and political context of emigration.

This book details the Scotch-Irish legacy as it relates to American society, culture and politics.

Canada is as much a nation of immigrants as the United States. And what is the link between this, the second largest country in the world, and the province of Ulster? No Country contributed more to the establishment of Canada than Ireland.