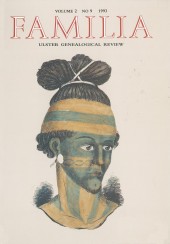 "The Fitzgeralds of Kildare belong to one of the most documented dynasties in Ireland. Books by the score have been written about 'the good family', as the Geraldines became known, recording their dominance of the social and political life of the country.

The names of the Great Earl of Kildare and his son Silken Thomas (not forgetting his five uncles who were executed at Tyburn) should be known to every school-child. There have been major studies of the first Duke of Leinster and his wife, Emily.

No fewer than 1500 pages of correspondence of the Lennox sisters have been published, and fulsome biographies of the Locks of Norbury and the military Napiers have been written. Every twist and turn of the politics and romances of Lord Edward Fitzgerald, and his tragic wife, Pamela, have been recounted, and the mystery of Pamela's birth probed in a dozen books.

We have been told a great deal about the lives of such contemporaries as Charles James Fox, Lord Castlereagh, Richard Brinsley Sheridan, Madame de Genlie and the third Duke of Richmond, and quite obviously there is no lack of information about the French Revolution, the 1798 Rising, and the Act of Union of 1800.

The 'Pisan circle' in which the poets Byron and Shelly participated, and which has some connection with the Fitzgerald family. has been the subject of the most intense literary investigation since 1821-2."

This article looks at William Ogilvie, who married the first Duchess of Leinster in 1774, and who lived through many important events and knew many famous people in the late eighteenth and early nineteenth century, but whose own life and career remains something of an enigma.

Flann Campbell (1919-1994) was born in Glencree, Co. Wicklow.
Author of Eleven Plus and All That: The London Grammar School (1956); issued The Dissenting Voice (1991); contributed to Irish Times, New Statesman, New Society, and Times Literary Supplement.