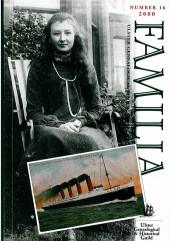 "Ulster emigrants represented the second-largest stream of Europeans coming to North America in the colonial period, and their descendants number in the millions today.

But they and their legacy are in many ways a paradox. They left few clear traces of their culture, and most of their descendants know little about them. Though they were usually poor, their meagre belongings enabled them to be mobile. They were amongst the most literate of emigrant groups in their day and built schools wherever they went.

Yet they left few records of their own and, except for fragments, have never recorded their own history. Historians, on the other hand, have written much about them and disagreed widely, frequently, and passionately. Far less is known about them than many emigrant groups a fraction their size."

This article examines the many ways in which historians look at the Scotch-Irish, and also how they influenced the present-day language of the United States.

Michael Montgommery is Professor Emeritus of English and Linguistics at the Univeristy of South Carolina. For the past twenty years he has read widely in the archives and museums of Ireland, Scotland, and the U. S. to find the material for this book. He has written extensively on Irish and Scottish links to American English as well as on the English of his native southern United States. His most recent book is Dictionary of Smoky Mountain English (2004). He is Honorary President of the Ulster-Scots Language Society.