Electronic Articles · "For Philadelphia, Boys, Are We Bound" - The Rev. Joseph Rhea Comes to America in 1769 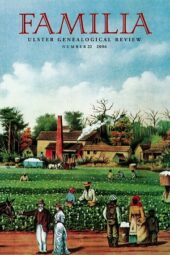 On a day in late September 1769, the Rev. Joseph Rhea, Presbyterian minister at Fahan, County Donegal, his wife Elizabeth, their children Matthew, John, Margaret, William, Elizabeth, Joseph, and Samuel, and his wife’s niece Fanny Dysart, came on board the brig George of Londonderry to begin their journey to America. The George lay at anchor off Quigley’s Point in the Foyle estuary until she was ready to sail.

Rhea began to keep a daily journal on 9 October 1769 and continued it until the George docked at Philadelphia almost two months later. The experience of the passengers on board the brig George, as narrated by the Reverend, was likely typical of the voyage to America.

This article examines their journey, looking at the journal entries and more.

His research interests have been in eighteenth-century America: Viriginia, Mennonites and other German settlers, and the Scotch-Irish. His books include The Five George Masons: Planters and Patriots of Maryland and Virginia (Charlottesville: University Press of Virginia, 1975); Conscience in Crisis: Mennonites and Other Peace Churches in America 1739-1789 (Scottdale, PA: Herald press, 1979); and Land, Piety, Peoplehood: The establishment of Mennonite Communitiies in America 1683-1790 (Scottdale OA: Herald Press, 1985).

Scotch-Irish Merchants in Colonial America: The Flaxseed Trade and Emigration from Ireland, 1718-1755 (eBook)£11.99

‘If they would come to America’ – Inheritance As A Form Of Chain Migration£1.00