All Departments · Education and Healthcare · The Struggle for Shared Schools in Northern Ireland: The History of All Children Together 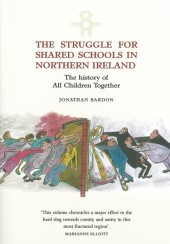 Starting out as a small but energetic and, above all, committed group of parents in County Down in the early 1970s, All Children Together (ACT) believed that, as long as children continued to be educated separately, there was little hope of healing the festering wounds in a society blighted by bitter division. This is the story of the pioneers of the integrated education movement in Northern Ireland.

The book chronicles how ACT faced powerful establishment resistance ' both clerical and lay ' to a vision that would see children of all religions and no religion educated together.

At the political level it describes how, crucially, ACT persuaded Westminster to pass enabling legislation in 1978. Then, in 1981, came the great leap of faith with the establishment of what would become the flagship of the movement, Lagan College, with a mere 28 pupils. Thereafter ACT embarked on a programme to convince government to make funds available to parent groups, wishing to do so, to found integrated schools. Despite frequent setbacks the movement developed at an impressive pace until, by September 2008, there were 19,183 pupils in 62 schools in every part of Northern Ireland.

Jonathan Bardon has spoken to many of those involved from the outset in the campaigns for shared schools, and trawled through reports, newspapers, the unpublished records of ACT and government files recently opened under the 30-year rule. What emerges is a remarkable tale of determination, tenacity, courage, dedication and, above all, vision by ordinary men and women from both sides of the religious divide. Their example moved Lord Mawhinney to describe them as 'among the first genuine peace people'. Indeed, it could be said that no account of the Troubles is complete if it omits the story of All Children Together, a story that has given Northern Ireland a platform on which to build a post-conflict society based on respect for all traditions and religions.

Appendix 1: Some milestones before the conflict

Appendix 3: Speech made by Bettie Benton at the peace meeting in Grosvenor Hall, Belfast on 11 September 1974

Appendix 6: ACT submissions to the Department of Education and Science in Westminster and other bodies, 1977-2000

Appendix 11: 'ACT on shared schools': an All Children Together discussion document, June 1976