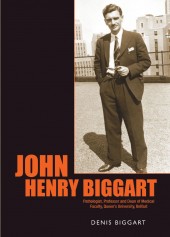 "John Henry Biggart was quite simply the most creative force in Ulster medicine in the twentieth century, perhaps ever." With these words Sir Peter Froggatt, former Vice-Chancellor of Queen's University, Belfast begins his foreword to John Henry Biggart: Pathologist, Professor and Dean of Medical Faculty, Queen's University, Belfast by Denis Biggart, his son.

The first part of the book is based on memories of John Henry which he jotted down in his last few years for his own edification. He covers such themes as: early childhood in the country with his parents, school teachers, school days at R.B.A.I., university education at Queen's, clinical training at the Royal Victoria Hospital, Belfast and his decision to follow a career in pathology.

He gained a prestigious Commonwealth Scholarship, spending two years at Johns Hopkins Medical School in Baltimore, USA, then returning to Edinburgh University as a pathologist and lecturer. In 1937, aged only 31, he became Professor of Pathology at Queen's University, Belfast, the start of an illustrious university career which included an unprecedented 27 years as Dean of the Faculty of Medicine and culminating in being appointed as a Pro-Chancellor of Queen's in 1972.

In this biography, Denis Biggart brings his unique perspective on his father ' as a son, a medical student, a trainee pathologist and a lecturer in his Department, revealing sides to John Henry's character which were hidden from professional colleagues.

Given Biggart's stellar medical and university career, it is little surprise that Sir Peter concludes with the following observation: "Everyone who knew Sir John Henry Biggart or has profited from his medical education should welcome and possess this book, which now fills a yawning gap in the 177-year Belfast Medical School's historiography."

Dr Denis Biggart was born in 1936 in Edinburgh. In 1937 he moved to Belfast when his father became professor of Pathology at Queen's University. He received a broad education in science and classics at the Royal Belfast Academical Institution where he also played Rugby for the 1st XV.

In 1961 he qualified in medicine at Queen's and opted to follow a postgraduate career in pathology gaining an M.D. (Hons.) in 1965. He won a Fulbright Scholarship to John Hopkins Hospital, Baltimore, 1967-8, gaining further valuable experience in diagnostic pathology and research. On return to Belfast he became Lecturer in the Institute of Pathology and was promoted to Senior Lecturer/Consultant in 1970.

He moved to the Belfast City Hospital Laboratory in 1973, acting as Consultant Pathologist to the City Hospital, whilst continuing to lecture to undergraduates at the Royal Victoria Hospital. He became Head of the City Hospital Histopathology Department in 1992 and continued in this role until his retirement in 1997. Throughout his career he was a keen undergraduate and postgraduate teacher and involved in numerous Health Service, University and Postgraduate Educational committees.