All Departments · eBooks · A Chronicle of Comber 1873-1912: The Town of Thomas Andrews, Shipbuilder (eBook) 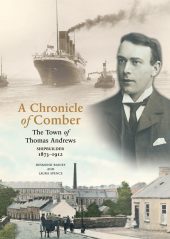 A Chronicle of Comber 1873-1912: The Town of Thomas Andrews, Shipbuilder paints an intimate picture of Comber, County Down, home town of Thomas Andrews Junior, Shipbuilder, during the thirty-nine years of his short but hugely influential life (1873'1912). It provides an outline of Thomas and the Andrews family; and will be gratefully acknowledged by the many who seek to learn more about this modest man ' one of the most iconic, yet relatively unknown, personalities associated with RMS Titanic.

Thomas Andrews Junior was Chief Engineer in what was then the largest shipyard in the world, Harland and Wolff. Many of Comber's inhabitants worked in the shipyard and celebrated the launch of RMS Titanic on 31st May 1911. A Chronicle of Comber describes something of the impact on the town and the Andrews family of the tragic events of the following year.

Join the 1912 'walking tour' to see Comber as Thomas himself would have seen it ' or peruse the Ulster Directories of 1870 and 1912 to meet people he knew. Read about the Andrews family industries, the businesses, schools, churches and organisations in the town. The book includes a diary of local events, 1873'1912, based on articles in the Newtownards Chronicle ' as well as detailing key world events at the time. These were the subjects that would have been discussed round the dining table at Ardara, the Andrews family home.

This illustrated book will have an intrinsic appeal for anyone with an interest in Thomas Andrews and Titanic, and also for those interested in learning more about the historic town of Comber, County Down.