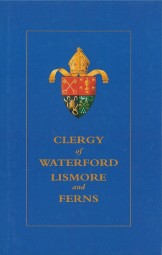 In the 19th century and earlier part of the 20th century a number of people produced succession lists of the different dioceses of the Church of Ireland. The best known of these were Canon James Leslie of Kilsaran and Henry Cotton, Dean of Lismore. In recent times considerable work has been done to update and publish Leslie's succession lists. In the case of Waterford & Lismore, it was Rev. H. Rennison, not Leslie, who was working on this diocese. Rennison's book contained only lists of clergy in parishes and no clerical biographies.

In compiling this book, Iain Knox has utilised the works of Dean Henry Cotton of Lismore (who published Fasti Ecclesiae Hibernicae) and the late Sidney Watson, Rev W.H. Rennison's Clergy and Parishes of Waterford and Lismore, Seymour's Succession of Clergy, and of course, Canon J.B. Leslie's work for Ferns and lists of clergy of Ossory. The result is an invaluable resource for the study of the Christian church in Ireland, and for local and family historians interested in the clergy and parishes of this ancient part of Ireland.

The Clergy of Waterford, Lismore and Ferns contains:
- Details of 2,000 clergy with biographical notes
- Photographs of the churches in use
- Brief histories of the dioceses of Waterford & Lismore, and Ferns, and histories of some of the parishes.
- The book also contains a facsimile of Leslie's work on Ferns.

Parishes and Clergy of Waterford and Lismore

Parishes and Clergy of Ferns