All Departments · Clergy Succession Lists · Clergy of Down and Dromore 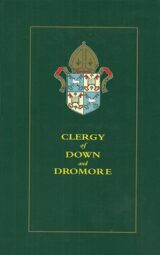 This book is a companion volume of "Clergy of Connor" published by the Ulster Historical Foundation in association with the Church of Ireland Diocesan Library Committee of Down and Dromore and Connor. It contains a Succession List of Clergy who have served in the United Diocese from 1930 until the present day, together with biographical detail of each individual. For the pre-1930 period, there are facsimiles reprints of Canon J. B. Leslie's Succession list for the Diocese of Down, originally published in 1936 and Dean H. B Swanzy's Succession list for the Diocese of Dromore, first published in 1932. In addition, lists are given for the succession of clergy in the Chapters of Down and Dromore Cathedrals as well as clergy from the diocese who served on the Chapters of Saint Patrick's Cathedral, Dublin and Saint Anne's Cathedral Belfast. The book also contains a brief history of every parish in the diocese, quoting, as far as possible, dedications, dates of consecration and architect, together with the evolution of the parochial district. There is a contemporary photograph of every church and in many cases, illustrations of previous churches which no longer exist or photographs of nearby ruins of previous churches. It will be an indispensable reference volume to ecclesiastical historians, genealogists and students of architectural history, as well as to anyone contemplating writing a parish history.

A Brief History of the Dioceses of Down and Dromore

Parishes of Down and Dromore