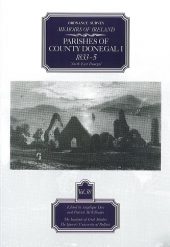 The Ordnance Survey Memoirs are a uniquely detailed source for the history of the northern half of Ireland immediately before the Great Famine. They were written in the 1830s to accompany the Ordnance Survey maps, but were not published at the time.

In these new editions they act as a 19th century Domesday book and are essential to the understanding of the cultural heritage of their communities. They document the landscape and situation, buildings and antiquities, land-holdings and population, and employment and livelihood of the parishes.

This volume contains the Memoirs for 14 parishes in north-east Donegal, including an impressive account of Lough Swilly, an extensive area from the coastline of Lough Foyle as far west as Downings and encompassing the peninsulas of Inishowne and Fanad, as well as Tory Island. Main areas covered in Inishowen include Buncrana, Carndonagh, Clonmany, Moville, Muff and Inch Island, while further west are the towns of Carrigart, Kilmacrenan, Milford, Ramelton, Rathmullan, Rosnakill and Tamney.