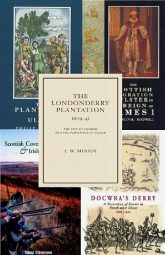 The Londonderry Plantation 1609-41: The city of London and the Plantation in Ulster

This publication was the first seriously scholarly attempt to understand what actually happened in the Londonderry Plantation; it was published at a time when Irish historical writing was entering a new phase with a more ‘scientific’ approach to historical writing and research, with Moody and his peers leading the way; and it is a valuable resource for local historians and those interested in changes wrought by developments in the seventeenth century.

The Plantation of Ulster: British Settlement in an Irish Landscape, 1600-1670

It is widely accepted that no understanding of modern Irish history is complete without an awareness of events in the 17th century. This is true in particular of the Ulster Plantation. Sir Henry Docwra's military expedition, which arrived in Lough Foyle in May 1600, at the height of the Nine Years War, was instrumental in paving the way for James I's Plantation of Ulster that began only a few years later ' after Docwra, the English stayed.

Scottish Migration To Ulster In The Reign Of James 1