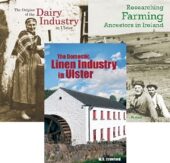 The Domestic Linen Industry in Ulster

First published in 2005 as The Impact of the Domestic Linen Industry in Ulster, this publication looks at the rise and growth of Ulster's domestic linen industry - an industry which left an indelible imprint on the history of Ulster.

Ulster's domestic linen industry played a pivotal role in the economic development and growth of the province which by 1800 saw Ulster emerge as the most prosperous region on the island of Ireland.

The Origins of the Dairy Industry in Ulster

Having been out of print for almost two years, The Origins of the Dairy Industry in Ulster is back in print and is available on our online store!

This thoroughly-researched book by George Chambers,former CEO of the Milk Marketing Board for Northern Ireland, examines the development of dairying in Ulster from earliest times through to the first part of the twentieth century.

The aim of this book is to help those with roots in the farming communities of Ireland find out more about their ancestors. Throughout this volume, attention is drawn to the richness of the documentation held in archives and libraries on the island of Ireland, as well as highlighting a selection of material found beyond these shores.