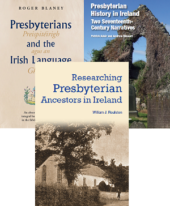 This bundle contains the following publications:

Millions of people around the world have Presbyterian ancestors from Ireland. The aim of this book is to help those with Irish Presbyterian roots find out more about their forebears. It considers the different strands of Presbyterianism in Ireland and explores the range of records generated by these religious denominations and where this material can be accessed by researchers. Much attention is focused on the documentation created by individual congregations, though consideration is also given to the records created by the higher courts of Presbyterianism and other bodies, as well as the personal papers of Presbyterian ministers.

This volume makes available to a modern audience two seventeenth-century texts that are critical to our understanding of the emergence of Presbyterianism in Ireland. Patrick Adair’s ‘True narrative of the rise and progress of the Presbyterian Government in the north of Ireland’ can be considered the origin text of the Ulster Presbyterian historical tradition. It is the earliest known account of the emergence of Presbyterianism in the province, covering the period from the 1620s to c. 1670, and was written by someone who witnessed at first hand many of the episodes he describes. This fresh edition is based on the earliest surviving manuscript copy of Adair’s text held by the Presbyterian Historical Society of Ireland.