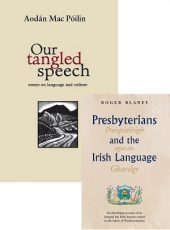 Our Tangled Speech: Essays on Language and Culture

Our Tangled Speech: Essays on Language and Culture provides a comprehensive overview of the Irish language revival north and south, examining its successes and failures. It gives a fascinating account of historical attitudes towards the Gael and examines the complexities of linguistic and cultural identity.

AODÁN MAC PÓILIN (1948–2016) spent his life working with and for the Irish language. He was by his own admission a ‘late bloomer’, having learned Irish as an adult. He moved, with his wife Áine Andrews, to the Shaws Road Gaeltacht in west Belfast in the mid-70s and was proud that Irish was their daughter Aoife’s first language and that she is passing it on to his grandchildren. He was actively involved with the Irish-speaking community there and was Chair of the first Irishmedium school in Northern Ireland at a critical period in its development. He was also a founding member of Comhairle na Gaelscolaíochta. Aodán, as Director of the ULTACH Trust (1990–2014), laid much of the groundwork for cross-community engagement with the Irish language in the early 1990s. He was a passionate and articulate advocate for the language, making significant and strategic contributions in a variety of areas, including Irish-medium education, language planning, the arts and Irish-medium broadcasting. He represented the Trust on a wide range of organisations, including the European Bureau for Lesser-Used Languages, Colmcille, The BBC Northern Ireland Broadcasting Council, Foras na Gaeilge, The Seamus Heaney Centre and was Chair of Ciste Craoltóireachta na Gaeilge. Aodán wrote and lectured extensively on many aspects of the Irish language, literature and culture. He edited Styles of Belonging: the Cultural Identities of Ulster (1992), Ruined Pages, New Selected Poems of Padraic Fiacc (1994) and The Irish Language in Northern Ireland (1997). He was a member of the editorial panel of The Great Book of Gaelic (2002) and co-edited Bás in Éirinn (2012). He was also a highly accomplished translator of Irish language prose and poetry.