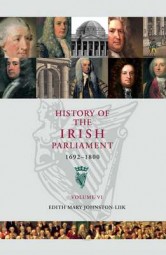 This is a paperback edition of History of the Irish Parliament, 1692-1800, which was published in 2002 and won critical acclaim on an extraordinary scale. It was followed in 2006 by MPs in Dublin, a shortened version with additional commentary for online use. The authority of this monumental work as a source of reference has been unreservedly recognised as 'truly awesome'. Professor Toby Barnard acknowledged that 'all concerned with Irish history ... must recognise the accomplishment'.

The publication of this remarkable work was the singular achievement of Professor Edith Mary Johnston-Liik and her loyal assistants, whose decades of dedicated research attracted the history community's '... sheer admiration for an author [who] has not only honoured the memory of those before her ... but who has triumphed over the generations of suspicion that frustrated its achievement during the 20th century'.

The Irish Parliament that sat in Dublin from 1692-1800 was the last Irish elected assembly to represent the whole of the island. It played a vital role in developing the nature and character of 18th century Irish society. The six volumes of the History of the Irish Parliament have three principal themes: who went to Parliament in the years 1692-1800; how did they get there; and what did they achieve?

Volume 1 contains a political survey of the entire century and a digest of the statutes at large for the period.

Volume 2 looks at the constituencies.

Volumes 3-6 give brief but thoroughly-researched biographies of the 2,300 MPs who sat in it. They are, consequently, ideally suited to inform and encourage further study of an institution whose widespread interests in the fields of religion, medicine, communications, protection of the environment, education, economics, agricultural and industrial development, and of course politics, all having much relevance for the island of Ireland in the 21st century.

MPs in Dublin: Companion to the History of the Irish Parliament£14.99£4.99