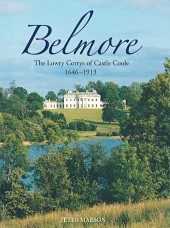 Belmore: The Lowry-Corry Families of Castle Coole, 1646-1913 tells the fascinating story of two families who left Dumfries in the mid 17th century to settle in Fermanagh and Tyrone. The marriage of Galbraith Lowry to Sarah Corry united their considerable fortunes and political clout. Their only surviving son, Armar Lowry Corry, inherited some 70,000 acres and an income of £12,000 and moved up in the heady world of Irish society and politics as Baron Belmore with a marriage arranged to a beautiful young wife and heiress, the eldest daughter of the Lord Lieutenant of Ireland.

To celebrate he built a great fashionable house, Castle Coole, today one of the jewels in the crown of Ireland's built heritage. One year later his life was in despair; his marriage over, leaving him with a baby girl and a sickly son. The expense of building and politicking made him 'poor as a rat'. Bitter opposition to the Union with England in 1801 resulted in their exclusion from political power for many years.

His son, Somerset the 2nd Earl, an extravagant Regency figure, furnished Castle Coole in the latest style, and with characteristic panache, refitted a capture American schooner and took his whole family for several years around the Mediterranean, up the Nile and into the Holy Land. They were the first noble family to reach the 2nd cataract up the Nile and to dig for antiquities in Egypt.

As Governor of Jamaica he successfully faced the bigotry of settlers and the great slave rebellion of 1832. His death in 1841 left the family facing bankruptcy and contributed to the 3rd Earl's early death. In spite of this threat to his family, Somerset Richard, the 4th Earl, by a combination of hard work, prudence and sales of large parts of his estates, was able, above all, to keep Castle Coole.

The changes of fortune that this widely respected family have faced over the last 250 years and the means by which it has survived make for an absorbing tale.

11. Situation, character and fortune
12. Donegal, London and Portsmouth: The travels Begin
13.'Something so novel, so interesting (in this degenerated age)'
14. A Stern Father and the Advantages of a Fortune
15. Governor, Vice Admiral and Lord Chancellor of Jamica
16. Home, a Proud Victory and Family

17. 'His Estate is his care and his tenantry, his family'

18. Youth and 'a dangerous situation'
19. The 'skeletons of departed camels': Egypt and the Holy Land
20. Complete Isolation and Dangerous Passion
21. Marriage and Family Life at Castle Coole
22. Epilogue

Peter Marson was educated at Westminster City School in London and graduated in law from Trinity College, Cambridge. He is a Fellow of the Royal Society of Arts. When he retired from a long career in law and business in 1990 he and his wife Ellen, who was born in Belfast, moved there and, in a career change, joined the National Trust. They worked principally at Castle Ward until, in 1994, Peter was appointed to manage Castle Coole, a house and demesne he had fallen in love with since first seeing it.

In 1998 Peter retired and took up the challenge of establishing the Lowry Corry family archive: cataloguing the enormous numbers of books, papers, letters and other private materials in the house and undertaking a long programme of research into the family's history to add as much as possible to the extensive work carried out by the 4th Earl in his two histories.

The Church of Ireland: an illustrated history£30.00