All Departments · Books · Biographies and Memoirs · Peoples Champion: The Life Of Alexander Bowman, Pioneer Of Labour Politics In Ireland 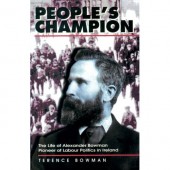 When Alexander Bowman was elected in Belfast Corporation as Labour member in Duncairn in 1897, the very idea that he would still be remembered a century later for his relentless championing of the working class cause appeared unthinkable. Yet Bowman, a near penniless flaxdresser from a humble farming background, richly deserves his place in Irish political and labour history.

Twelve years earlier in 1885, following his key role in the birth of organised trade unionism in Belfast, he had been the first working-class Irishman to seek a seat at Westminister. His subsequent support for Gladstone's Home Rule bill and the Dublin parliament which he believed offered the best hope of bringing together Irish people of all persuasions, attracted much criticism. Forced to leave Belfast in 1888, he found himself immersed in the embryonic socialist movements first in Glasgow and then in London.

Returning with new ideas to the Belfast trade union fold in 1895, he won the Corporation seat two years later and in 1901 was elected President of the Irish Trade Union Congress. This biography, by his journalist great-grandson Terence Bowman, pays long-overdue tribute to a labour pioneer who, at great personal cost, dedicated his life sufficiently to the welfare of the working classes to earn their, and now our, respect as a People's Champion.

The McKeown boy from Derry, Dromara

The Emergence of a Trade Union Leader

Gladstone and the Liberal Cause

The Resignation from Belfast Trades Council

Testimony at Westminster; Defiance in Ulster

The Bind of Passage's Transition from Nationalism to Socialism

old Wounds Re-opened for the Apostle of Socialism

A New Life on the Falls Road

Final Days and the Next Generation

Terence Bowman, great-grandson of Alexander Bowman, was born in Bangor in 1957 and attended Bangor Grammar School. He is editor of the Mourne Observer in Newcastle, Co. Down, which he joined in 1976, having completed the National Council for the Training of Journalists' pre entry course at the Belfast College of Business Studies. In 1991 he edited and published Railway Memories, which told the recollections of former employees of the railways in Co. Down.

Who Fears to Speak of 98: Commemoration and the continuing impact of the United Irishmen£6.99