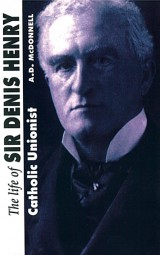 Denis Stanislaus Henry (1864-1925) occupies a unique place in the political and legal history of Northern Ireland politics. As a catholic, Denis Henry supported the Union from the time of Gladstone's first Home Rule Bill of 1886, and after joining the Ulster Unionist Council upon its formation in 1905, unsuccessfully contested the North Tyrone constituency in 1906 and 1907, losing by the narrow margins of 9 and 7 votes respectively.

Henry set aside these setbacks in politics and continued with his legal career which saw him emerge as one of the outstanding lawyers of the Irish Bar, practising in the Four Courts in Dublin, and becoming 'Father of the old North-West Circuit'. Henry eventually entered Westminster after winning his native South Derry seat in May 1916, in what was the first electoral contest in Ireland following the outbreak of the Easter Rising.

The Occasion was the first time in which a Catholic represented a Unionist constituency in Ulster, and Henry's retention of South Derry in the post-war general election of 1918 marked the last. After a brief period as Solicitor-General for Ireland in 1918, Henry was appointed Attorney-General in 1919, and as the leading Irish Law officer was at the forefront in Parliament in defending and explaining Government policy during the Anglo-Irish War of 1919-1921. Henry became the first Lord Chief Justice of Northern Ireland in 1921, and spent the final four years of his life leading a new Judiciary during one of the most turbulent periods in the province's history.

Early life and involvement in politics

Conclusions on the Life of Denis Henry

Sorry, we have no information on A. D. McDonnell.