All Departments · Books · Biographies and Memoirs · A Beleaguered Station: The Memoir of Head Constable John McKenna, 1891-1921 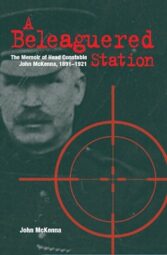 This book offers a unique insight into troubled times in the north of Ireland John McKenna, 1891–1921 spanning the Home Rule crisis of 1912–14, the 1916 Rising and the violence surrounding partition. The author, John McKenna, was a Catholic head constable in the Royal Irish Constabulary during this momentous period. In a brutally honest account he recalls how he had seen ‘nothing dishonourable’ in joining the police in 1890s Ireland. After an idyllic induction in the rural west he was transferred to the more problematic – and sectarian – setting of Ulster where he found his innate sense of justice sorely tested, not least by partisan influences within a changing RIC. McKenna was appalled by the failure of the RIC to prevent the illegal UVF Larne gun-running of 1914. A moderate Home Ruler, he had no sympathy with the 1916 Rising but believed that Carson’s tactics had inspired the Republican insurgents.

The core of the memoir deals with Head Constable McKenna’s ‘sickening’ experiences in Cookstown, Co. Tyrone during 1920–21 when he found himself in ‘a beleaguered station’, repelled by the sectarian attitudes of senior officers and haunted by the brutal sectarian murder by B-Specials of an innocent man and a high level cover-up. This is the first autobiographical account by a Catholic nationalist police officer of the 1912–21 era. Written in 1932, following the author’s personal experience of an attack on Catholic pilgrims travelling to the Eucharistic Congress in Dublin, it sheds new light on the birth pangs of Northern Ireland and the vital need for impartial policing based on cross-community support.The memoir is edited by the author’s grandson, John McKenna, with an introduction by Dr Éamon Phoenix.

Although born long after his grandfather had died, his interest in his RIC ancestor down the years has culminated in having A Beleaguered Station published. His current wider interest in the period of Irish history covered by the memoir resulted from research conducted in order to better understand his grandfather’s experiences.