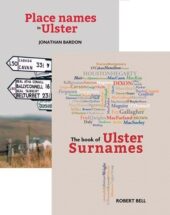 Add to your own research library and get both The Book of Ulster Surnames and Place Names in Ulster for just £13.99.

The Book of Ulster Surnames