All Departments · Who Fears to Speak of 98: Commemoration and the continuing impact of the United Irishmen 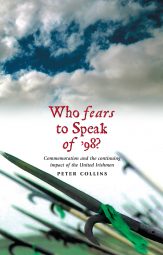 The Rebellion of 1798 was one of the most crucial events in modern Irish history, and the bicentenary commemorations throughout Ireland in 1998 provided much new understanding of an issue that has, down the years, been as divisive as it has been formative.

Who Fears to Speak of 98: Commemoration and the continuing impact of the United Irishmen, by Peter Collins, provides an absorbing and sensitively handled account of the changing nature of how the rebellion has been commemorated over the last 200 years. The author has adopted something of a 'warts and all' approach: resentment within Unionist and Loyalist communities and the hostility of the Catholic Church are covered equally.

A particularly helpful feature of this book is the detailed almanac it provides of the commemorative bicentenary events held throughout the island of Ireland in 1998. They were notable not only for the quality of their output but also, encouragingly, for their inclusivity. For the most part, this time commemoration of '98 was an activity in which people found a common purpose rather than the source of divisiveness it had tended to be in years gone by.

Dr Peter Collins is senior lecturer in History at St Mary's University College, Belfast. He is Secretary of the United Irishmen Commemoration Socity (UICS) in Belfast.