All Departments · The Plantation of Ulster: British Settlement in an Irish Landscape, 1600-1670 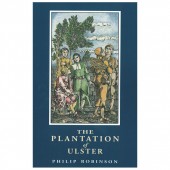 During the reign of James I, an official scheme was drawn up for the 'plantation' of designated areas in west Ulster. However, the actual area settled by the new colonists was much more extensive. With them came innovation. A radical transformation of the landscape began.

The spread of a market-based rural economy resulted in a quite spectacular growth in urbanisation. Permanent dwellings of a more sophisticated construction became the norm in many areas, and around the towns new field patterns emerged.

The spread of hedged enclosures heralded innovations in agricultural methods, tools, livestock, and systems of land tenure. In a more abstract sense, the settlers also brought with them a new language, new surnames, new religion and of course a change in political and historical allegiances.

Sorry, we have no information on Philip S. Robinson.